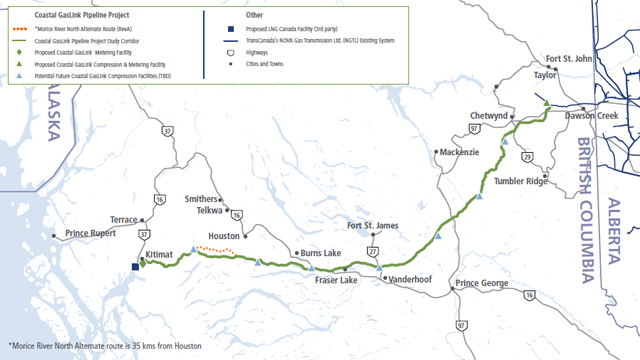 TransCanada has received the last two of 10 pipeline and facilities permits required from the BC Oil and Gas Commission for the Coastal GasLink Pipeline Project. The project now has approval for construction and operation of the proposed pipeline and related facilities.

The pipeline will connect to the proposed LNG Canada natural gas liquefaction and export facility near Kitimat. A Final Investment Decision by the joint venture partners of LNG Canada is expected in late 2016. If the LNG Canada partners elect to proceed with the project at that time, construction would begin in 2017.

Coastal GasLink Pipeline Ltd., a wholly-owned subsidiary of TransCanada PipeLines Limited, proposes to build an approximately 415-mile pipeline from the Dawson Creek, British Columbia area to the west coast of British Columbia. The pipeline will transport natural gas to the proposed LNG Canada facility near Kitimat.

The project, which was announced on June 5, 2012, would involve construction with 48-inch diameter pipe, in addition to the construction and operation of up to three meter stations and one compressor station. The initial capacity would be approximately 2-3 bcf/day.

Additional details can be found at www.coastalgaslink.com.