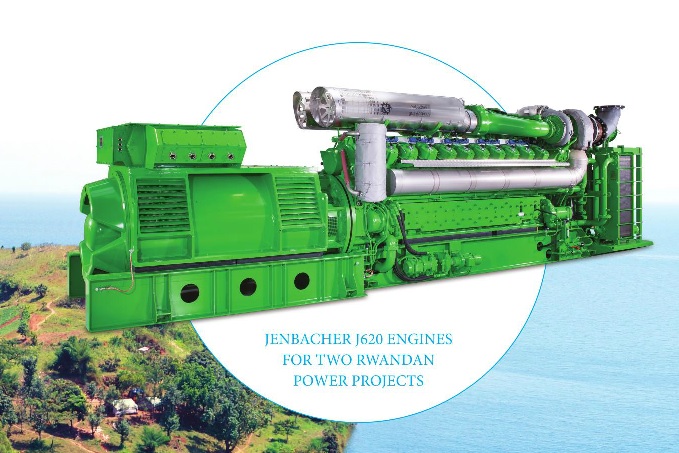 The Kivu 56 project is planned to export 56 MW of power into the Rwandan grid under a 25-year concession.

Lake Kivu is up to 1640 ft. (500 m) deep and it is the only lake in the world that emits methane gas from the lake bed into the water. This gas is produced by way of the unique combination of depth, heat originating from magma under the rift valley, and microbes breaking down organic material that falls from higher in the lake. The surface of the lake is 4790 ft. (1460 m) above sea level.

Unlike normal biogas, which is produced in anaerobic digesters, organic process plants process biodegradable waste, so at the base of the lake, the biogas contains only 20% methane. This level is lower than that required even in a Jenbacher gas engine. The plan is to strip the carbon dioxide—which forms the balance of the volume of the gas—using water and then to put the gas into reciprocating gas engines located at discrete power stations on the shores of the lake. The electricity from the engines will be put directly into Rwanda’s electricity distribution network.

To capture the gas, the resource rich water is tapped and auto-siphoned from the depths of the lake into tanks where it is separated from the gases and then returned to the lake. The gases are delivered to the shore by compressors mounted on barges where they are scrubbed in wash-water towers to produce high methane content gas that is injected into reciprocating gas engines in a power plant that produces 56 MW of power for delivery to the Rwanda grid system.

The KP1 project is an upgrade of the gas to power pilot project that proved that methane gas could be successfully extracted from the lake and converted into electricity. Symbion associate, Symbion Power Lake Kivu acquired the pilot plant in 2016 in order to upgrade it from 3.6 to 25 MW of net power to be delivered to the Rwanda grid system.

This article appears in the October issue of Gas Compression Magazine.