Liquified natural gas (LNG) infrastructure and commerce can provide more than just hearty cash flow generation. The reason LNG is so valuable, geopolitically, is because it allows any country with capital and trade to be self-reliant in its energy needs. Tethered to a pipeline, even with a fair contract, is always going to be a security risk since fuel is the lifeblood of war. Many dominant economies, such as China, Japan, and Germany (the 2nd, 3rd, and 4th largest economies, respectively) are energy dependent. That’s why all three are very interested in LNG imports from multiple suppliers to diversify their energy needs.

The International Energy Agency (IEA) projects that 50 countries will be importing LNG by 2025, up from just 10 at the start of this century. As a response to this anticipated increase in demand, investments in LNG infrastructure and natural gas production have been rising. Note that an LNG carrier, depending on its class, can carry 5 to10 MMcf (141 x 103 to 283 x 103 m3) of LNG. Since LNG is 1/600th the volume of natural gas, the gas-equivalent of this carrier capacity is more like 3 to 6 Bcf (84 x 106 to 254 x 106 m3) per shipment, or around 5% of US daily production. This is all to show just how much energy each LNG carrier is transporting, and why infrastructure investments in regasification plants, liquefaction plants, export terminals, and LNG carrier builds have gone up in recent years.

Currently, Qatar, Australia, and the United States are the top three LNG-exporting countries in the world. 2018 and 2019 have seen a rapid rise in the construction of liquefaction plants necessary to export the volume demanded by nations located around the world. Under current growth rates and investments, the IEA forecasts continued growth for LNG through 2040.

The US Energy Information Administration (EIA) reports that “LNG producers currently have the ability to export 3.6 Bcf (101 x 106 m3) of natural gas. But with at least 18 LNG production units expected to come into service over the next 12 months, export capacity is expected to grow to 8.9 Bcfd (252 x 106 m3/d) by the end of 2019. At that level, the US will be the third-largest LNG exporter in the world behind Australia and Qatar.”

In the first four months of 2019, US exports of LNG rose 68% compared with the same period a year earlier, a phenomenal start that puts the US on track for the EIA’s forecast.

In terms of importers, Japan, Korea, and China import more than 55% of the world’s LNG. India, Bangladesh, and other Southeast Asian countries are expected to be ripe buyers in the coming decades as they continue to industrialize. LNG import terminals not only improve the reliability of power grids in developing nations, but they also can reduce energy costs as well. 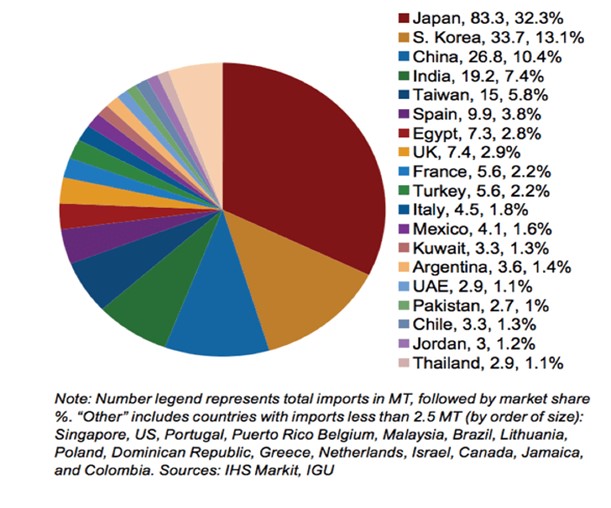 The US is the now the number one producer of natural gas, currently producing around 100 Bcfd (2.8 x 109 m3/d). That being said, it takes more than just gas production to make LNG exports a reality.

In May 2019, the US Federal Energy Regulatory Commission (FERC) approved the construction of the Train 4 expansion at the Freeport LNG terminal in Texas. The project was the fourth FERC-approved LNG export project of 2019. The project will allow for the export of 740 MMcfd (20 x 106 m3/d) of natural gas from the site.

In June 2019, Cheniere Energy Inc. announced the construction of the sixth liquefaction train at the Sabine export terminal. The Sabine terminal is shaping up to be the LNG exporting capital of the US Gulf of Mexico, perfectly positioned to receive natural gas from multiple US gas plays, most notably the Permian Basin. On top of the Sabine Pass, Cheniere is planning to add a third stage to its Corpus Christi LNG export train as early as 2020.

Like anything in the energy industry, infrastructure developments are heavily affected by regional spot prices. In late August, the Trump administration threatened to roll back the Obama administration’s policies on methane emissions. The consequences of this rollback extend beyond the US market. Although support is high for natural gas and LNG in Asian markets, recent declines in Asian LNG spot prices have weakened the market.

The Power of Siberia pipeline adds increased competition in the Asian market. The Power of Siberia is Russian-backed Gazprom’s ultimate gem, capable of discharging 2.1 Bcf (61 x 109 m3) per year of natural gas. The Asian market, for both developed and developing countries, is the primary target for LNG exporters. Both Russia, in the form of natural gas pipelines, and LNG exporting countries provide competitively priced energy offerings. That being said, mid-scale LNG projects and Floating Liquefied Natural Gas (FLNG) platforms provide other ways for investors to dip their toes into the LNG market without exhausting CAPEX.

Despite short term pressures on spot prices in Asian LNG markets, long term demand for natural gas and LNG remains strong. Shell expects gas to account for more than 40% of total energy demand growth until 2035 as developing and developed countries find switching from coal to gas to be the easiest way to hit emission reduction targets. Demand for natural gas is forecasted to rise by 45% by 2040, with gas overtaking coal by 2030 as the second-largest source of energy after oil.

Asia is a market teeming with buyers, and Australia is doing everything it can to provide the terminals and fleets necessary to meet that demand. Excelerate is one of the world’s largest LNG exporters and owns more than one-third of total active floating storage and regasification units (FSRUs)12. FSRUs are offshore terminals that benefit from flexibility, as they are able to move to markets where demand and spot prices are the highest. There’s cost savings too. According to a 2018 report from the International Gas Union, it costs US$274 for each metric ton of imported LNG to an onshore regasification plant. Conversely, it’s only US$129 per metric ton of capacity on an FSRU.

As a response to this price disparity, Australia is considering using offshore vessels to store LNG before heating it through onboard re-gasification systems. Opinions suggest that it would be cheaper to have floating import terminals instead of connecting Eastern Australia (home to offshore gas fields and coal fields) to Western Australia via a pipeline. Australia is projected to export 80.73 million metric tons of LNG this year, compared with 70.23 million metric tons in 2018, according to the research firm Wood Mackenzie.

LNG has the potential to become one of the most globally sought-after forms of energy. For that to happen, capital intensive infrastructure projects must be constructed in such a way as to create a balance between export and import terminals, liquefaction and gasification plants, and plenty of LNG carrier vessels. Today, there is little doubt of the potential of LNG, but an emphasis on capital discipline from hesitant shareholders means careful consideration for any proposed project.

This article appeared in the October issue of Gas Compression Magazine.

Don’t miss an issue of Gas Compression Magazine! Sign up today for free monthly delivery (print, digital, or both) and stay informed on the lasted developments in the global gas compression landscape.

Sponsored Content: Introducing The Gulf Coast’s One And Only Compressor Test Stand