After three years of delays, Dominion Energy (Dominion) has decided to sell US$4 billion of its Atlantic Coast Pipeline (ACP) gas network assets to Berkshire Hathaway Energy, a subsidiary of Warren Buffett-led Berkshire Hathaway (Berkshire). Dominion, the main proponent of the project, envisioned that the ACP would carry up to 1.5 bcfd (42.4 x 106 m3/d) of natural gas through the Marcellus-Utica shale region of West Virginia, Virginia, and North Carolina, USA, across 600 miles (965 km) of pipe.

Although the asset sale marks the end of the Dominion-led Atlantic Coast Pipeline, the door is wide open for Berkshire to flex its financial muscle and utilize the assets as it sees fit.

The news related to the ACP came on top of two other major events that affected over 3000 miles (4828 km) of pipe the week of July 5 to 11. The first was the Dakota Access Pipeline, which may shut down pending an environmental review. Second, the Trump Administration’s proposal to allow construction of the Keystone XL pipeline was rejected by the US Supreme Court.

The most surprising thing about the Dominion Energy asset sale was that it came less than a month after the US Supreme Court voted 7-2 in favor of the construction of the ACP 600 ft. (183 m) below the Appalachian Trail. The Appalachian Trail is an environmental treasure, backpacking hotspot, and one of the longest hiking trails in the United States, spanning around 2200 miles (540 km). But even after the favorable US Supreme Court decision, the ACP would still have faced several permits and local regulatory hurdles before it could be built. Dominion stated that “ongoing delays and increasing cost uncertainty threaten the economic viability of the project.”

In many ways, this news showcased the recent success of environment groups to stymie the progress of pipelines. Even if pipelines are eventually approved, the delays can be very costly. Brandon Barnes, a senior litigation analyst with Bloomberg Intelligence, noted that federal approval for construction of a gas pipeline crossing interstate lines went up from around 386 days in 2009 to nearly 600 days toward the end of 2018. Juggling unpredictable federal approval on top of the funding, procurement, and execution that gas pipeline projects require puts the midstream sector in an awkward position.

Details Of The Deal

Berkshire will pay US$4 billion in cash to Dominion Energy in addition to assuming US$5.7 billion of Dominion’s debt, valuing the real cost of the deal at the tidy sum of US$9.7 billion. Once approved by regulators, the deal is estimated to be finalized in the fourth quarter of this year.

The Questar Pipeline is an interstate pipeline that delivers natural gas throughout the Rocky Mountains. Specifically, it transports and stores natural gas for customers in Utah, Wyoming, and Colorado, USA. The total length of the Questar pipeline is 1888 miles (3038 km). The total daily capacity of the pipeline is 2.53 bcfd (71.6 x 106 m3/d). The Questar pipeline currently has around 75 receipt points, nearly 40 delivery points, 12 compressor stations, and four underground storage basins.

The Cove Point LNG terminal is located on the Chesapeake Bay in Lusby, Maryland, and has 14.6 bcf (413.4 x 106 m3)of storage capacity and a daily send-out capacity of 1.8 bcf (50.9 x 106 m3/d). It is one of six export-import storage facilities in the US. The terminal works with the Cove Point Liquefaction Project. The Cove Point facility has a nameplate capacity of 5.25 million tonnes per annum (MTPA) of LNG.

Warren Buffett, regarded as one of the greatest investors of all time, seems to have made a purposeful and timely investment in these assets. Although there remains a substantial amount of environmental protest, not to mention ongoing costs associated with keeping the project on hold, Buffett was able to secure the assets after a favorable supreme court ruling. The assets feed into Berkshire Hathaway’s portfolio of energy and utility assets.

The significance of Warren Buffett’s purchase cannot be ignored. It marks the first major acquisition by Berkshire Hathaway since the onset of the COVID-19 pandemic. As of May, when Berkshire hosted its first ever virtual annual shareholders meeting, the company had US$137 billion in cash as Buffett waited patiently for opportunities to come to him. Also disclosed during the meeting was the fact that Berkshire had unloaded all of its holdings in US airline stocks for a total of US$6.1 billion, proving that Buffett is picking and choosing only those US industries where he sees value. But even within industries he likes, Buffett remains selective. For example, in early March, Berkshire pulled out of a potential US$3 billion investment in Saguenay LNG at the Port of Saguenay, Quebec, Canada.

Over the past few years, Buffett has described his investments in battleground sectors such as oil and gas and railroads as an “all-in wager on the economic future of the United States.” He has been purchasing these assets when others are selling them, which aligns with his famous maxim to “be fearful when others are greedy and be greedy when others are fearful.”

Before the deal, the Atlantic Cost Pipeline was estimated to be a US$8 billion project, 53% owned by Dominion Energy and 47% owned by Duke Energy.

As of May, Dominion Energy estimated that gas transmission and storage would make up 24% of its estimated 2020 earnings. In terms of the Atlantic Coast Pipeline, the total capital expenditures of the project to date are a hefty US$3.6 billion with Dominion’s project-level debt amounting to US$1.8 billion. As of its first quarter 2020 earnings update, Dominion estimated that the Atlantic Coast pipeline would contribute 20 to 25 cents of earnings per share once fully in service for the entirety of 2022.

The permit summary of the Atlantic Coast Pipeline as of May 2020, which reflects a judicial solution to the Appalachian Trail crossing, is as follows:

The Atlantic Coast Pipeline has long been a contested value proposition. The project is now out of the hands of Dominion and Duke Energy and into the throng of Berkshire’s arsenal of cash and energy assets. But this story is much bigger than just the ACP.

Warren Buffett is now Mr. 18%, a pivotal player in the US natural gas transmission network. Unlike its pipeline peers, Berkshire Hathaway is a massive conglomerate focused on more than just energy. In terms of market capitalization, it’s larger than the combined value of ExxonMobil, Chevron, and BP. Thanks to its latest acquisition, the Warren Buffett-led Berkshire Hathaway now controls 18% of US interstate natural gas transmission.

It’s likely that the timing of the acquisition was no accident. Buffett doesn’t like to take unnecessary risks, but he sure likes to take advantage of a situation. Dominion Energy was battle-weary and had been looking to move away from legacy assets toward renewables and predictable cash flow from utilities. On the other hand, Buffett’s guiding principle is profit. Where he sees value, he buys.

In sum, the Atlantic Coast Pipeline is not dead. Rather, its components now lie scattered into fragments across the portfolio of Berkshire Hathaway. With a clean slate and new ideas, it wouldn’t be surprising if Warren Buffett picks up the pieces and builds something completely new and maybe even better than what the contentious Atlantic Coast Pipeline could ever hope for. 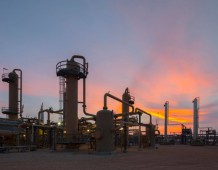