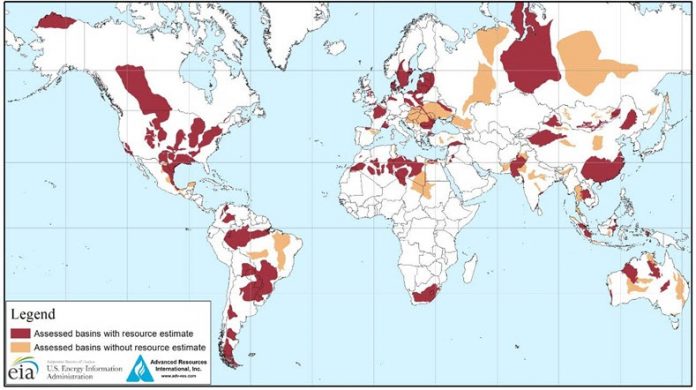 Elsewhere around the globe, shale continues its rise.

China’s shale gas production in 2016 rose by 76.3% to a new record of 278 Bcf (7.9 x 109 m3) according to data released by the Chinese Ministry of Land and Resources (MLR). Among the other data released by the MLR, US$1.3 billion was spent on exploring for shale gas in China in 2016. China’s exploitable shale gas reserves are estimated at 769 Tcf (21.8 x 1012 m3), with proven reserves comprising 19.2 Tcf (544.1 x 109 m3). According to the EIA, China has the world’s largest technically recoverable reserves of shale gas, which it estimates at 1115 Tcf (31.6 x 1012 m3), or 68% higher than shale reserves in the US. However, the reserves are located in geologically challenging areas, there is no developed production and transportation infrastructure, and exploration rights are limited. That could change, as the China is investing heavily in shale gas. Shale gas is projected to account for more than 40% of the country’s total natural gas production by 2040, which would make China the second-largest shale gas producer in the world after the United States.

Argentina is home to the world’s second-largest shale gas reserves and step taken by the Argentine government to entice foreign investments are beginning to pay off. Covering a total area of roughly 12,000 sq.mi. (30,000 km2), Vaca Muerta holds an estimated 308 Tcf (8.7×1012 m3) of dry, wet, and associated shale gas resources. While Vaca Muerta is still in the preliminary stages of development, Argentina has been actively wooing investors and quickening the pace of development. According to the country’s Energy and Mining Minister Juan Jose Aranguren, Vaca Muerta shale field received between US$6 and $8 billion worth of confirmed investments in 2017 and expects between US$12 and US$15 billion in investments in 2018 and US $20 billion annually in 2019 and beyond. Government authorities expect the Vaca Muerta formation to supply as much as 50% of Argentina’s natural gas needs by 2021, and 60% of its oil requirements by 2020.

Mexico’s shale gas reserves are the 6th largest in the world, according to EIA data. Mexico’s government has been aggressively reshaping its energy landscape, embarking on institutional reform to economic growth and competitiveness. Those moves have paid off and its vast shale reserves could soon provide Mexico with locally sourced fuel to meet its growing energy demands. Mexico is currently dependent on gas from the US, with the daily import averages around 4.5 Bcf (127 x 106 m3), accounting for roughly up 60% of the country’s consumption. This fall, Mexico will auction development rights to shale blocks, marking the first time the country has offered private oil companies the chance to develop the resource. The blocks are in Mexico’s Burgos Basin and contain an estimated 1.16 billion barrels of oil equivalent (boe), plus another 53 million boe of conventional oil and gas resources, according to energy ministry data. Mexico’s total prospective shale resources have been estimated at 60 billion boe.

The shale potential in Mexico is even larger than the country’s deepwater resources in its territorial waters in the Gulf of Mexico. If successful, the contracts could be worth more than US$150 billion over their lifetime, according to energy ministry estimates

Available monthly in print and digital delivery (or both), it’s free to subscribe!