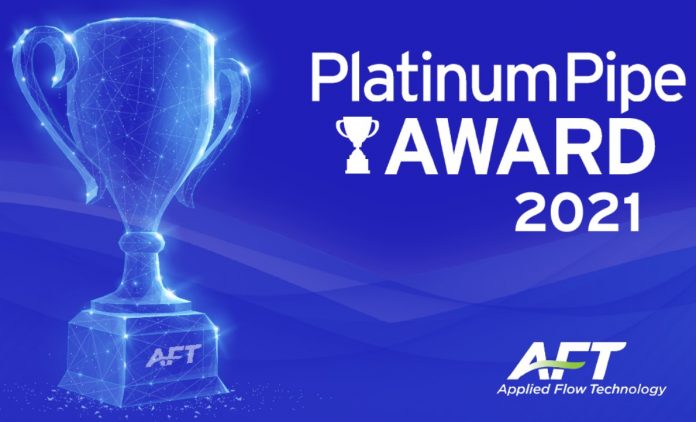 Applied Flow Technology (AFT) is accepting entries for its 2021 Platinum Pipe Award. Since 2004, the annual contest has recognized excellence in piping and ducting system modeling using AFT software. Each year, projects are recognized in following the categories:

Winners receive a US$500 gift card or a donation to their charity of choice, unlimited bragging rights, and US$2000 in software for their company.

Founded in 1993, AFT provides pipe flow modeling software. With a primary focus on developing fluid flow analysis software, AFT’s line of products for the analysis and design of piping and ducting systems is used in more than 80 countries.

A water injection system off the coast of Brazil is transferred through 12-in. (304-mm) subsea flowlines to wellhead platforms which are located more than 2 miles (3.2 km) from the floating production storage and offloading units. A dynamic study on the water injection system performed in 2010 identified issues related to water hammer in the main process and subsea flowlines which have not been resolved. Waterhammer/liquid surge effects can cause high transient pressures in specific local areas due to the interaction of surge waves propagated through and reflected from the various pipelines, valves and fittings in the system. On a complex water injection system, overall assessment of the entire system considering all scenarios with the potential to generate water hammer effects is essential and can produce counter-intuitive results. The waterhammer analysis study has been performed to assess the entire produced water and water injection system for surge pressures resulting from the most onerous credible valve closure scenarios.

This model focuses on crude and slop transfer pipelines in South Africa. Overfill protection will be installed on various tanks in the tank farm of the client. This will involve the addition a motor operated valves (MOVs) on the inlet to each of the tanks. If these MOVs are closed while crude is being transferred to the tanks via the 75-mi. (120-km) transfer pipeline, it will cause a surge pressure which can potentially exceed the design pressure of the pipeline. Similarly, if slop is transferred from the plant to the storage tanks, a surge pressure will also be created in the slop transfer line. A surge analysis was performed in AFT Impulse on the crude and slop transfer systems to determine what the closing times of the MOVs should be to prevent the pipeline design pressure from being exceeded.

Brown and Caldwell was hired to design the reliability and process improvements project at a 64 million gallons-per-day wastewater treatment plant. This project is following the progressive design-build procurement method and includes improving the secondary treatment processes at the plant by replacing aging equipment and improving plant efficiency and operations. This includes upgrades to multiple process units at the plant including the aeration tanks and blowers. The aeration tanks are part of a secondary biological nutrient removal process that uses the microorganisms that naturally occur in wastewater to biodegrade the organic matter in the wastewater. AFT Arrow was used extensively for the operations optimization, design, and planning for the upgrades to this aeration system at the plant.

This study was due to the high frequency of non-programmed shutdown at a desalination plant in Brazil. Shutdowns lowered the capacity of the plant to about 94% of its nominal capacity. The system modeled include nine ERS racks (modeled as positive displacement pumps), nine valves to simulate the shutdown of an ERS rack in different configurations, and two brine tanks. With the performance of hydraulic chimneys, the non-programmed shutdowns were reduced to an average of one shutdown per day. With these results, the desalination plant increased its throughput by 6000 m3 per day, which lead to savings of US$175,000 per year.