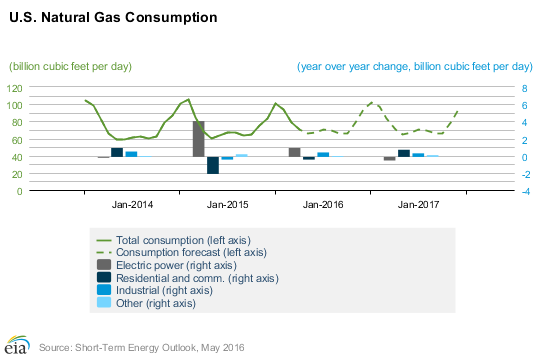 The U.S. Energy Information Administration (EIA) has released its Short Term Energy Outlook. The data shows some improvements within the natural gas sector, but pricing looks to remain weak through summer 2016 as supply remains high.

According to the EIA report, marketed natural gas production was 80.1 Bcf/d in February 2016, which is the second-highest production level on record and an increase of 1.4% from January. Growth was strongest in the Marcellus and Utica production areas. Production in Pennsylvania (measured in Bcf/d) increased by 3.5% from January levels, and production in Ohio and West Virginia increased by 10.7% and by 1.7%, respectively. However, preliminary data since February, including EIA’s Drilling Productivity Report, indicate production growth may be slowing because of reduced drilling activity in response to low natural gas prices. Despite recent data showing growing natural gas production in February, more recent preliminary data indicates that production may be leveling in the next few months. EIA forecasts relatively unchanged production through the rest of 2016, as low natural gas prices and declining rig activity begin to affect production. In 2017, however, production is expected to rise in response to increases in price, demand, and liquefied natural gas (LNG) exports. Overall, EIA expects production will rise by 0.9% in 2016 and by 2.2% in 2017.

EIA expects natural gas exports by pipeline to Mexico will increase because of growing demand from Mexico’s electric power sector and flat natural gas production in Mexico. EIA projects LNG gross exports will increase to an average of 0.5 Bcf/d in 2016, with the startup of Cheniere’s Sabine Pass LNG liquefaction plant in Louisiana, USA, which sent out its first cargo in February 2016. EIA projects gross LNG exports will average 1.3 Bcf/d in 2017, as Sabine Pass ramps up its capacity. Inventories in March ended at 2478 Bcf, the highest end-of-withdrawal-season level on record. The first significant inventory increase of the injection season occurred the week ending April 22, with a 73-Bcf build. Looking to the start of next winter, EIA forecasts inventories to be 4158 Bcf at the end of October 2016, which would be the highest level on record to begin the heating season.

The Henry Hub natural gas spot price averaged $1.92/million British thermal units (MMBtu) in April, an increase of 19 cents/MMBtu from the March price. Through the 2015─16 winter, prices remained relatively low because of lower demand as a result of warmer-than-normal temperatures, record inventory levels, and production growth. EIA expects prices will gradually rise through the summer, as demand from the electric power sector increases, but forecast prices remain lower than they were last summer. Monthly average Henry Hub spot prices are forecast to remain lower than $3.00/MMBtu through December 2016. Forecast Henry Hub natural gas prices average $2.25/MMBtu in 2016 and $3.02/MMBtu in 2017.

Natural gas futures contracts for August 2016 delivery that were traded during the five-day period ending May 5 averaged $2.36/MMBtu. Current options and futures prices imply that market participants place the lower and upper bounds for the 95% confidence interval for August 2016 contracts at $1.64/MMBtu and $3.39/MMBtu, respectively. In early May 2015, the natural gas futures contract for August 2015 delivery averaged $2.85/MMBtu, and the corresponding lower and upper limits of the 95% confidence interval were $1.98/MMBtu and $4.11/MMBtu.