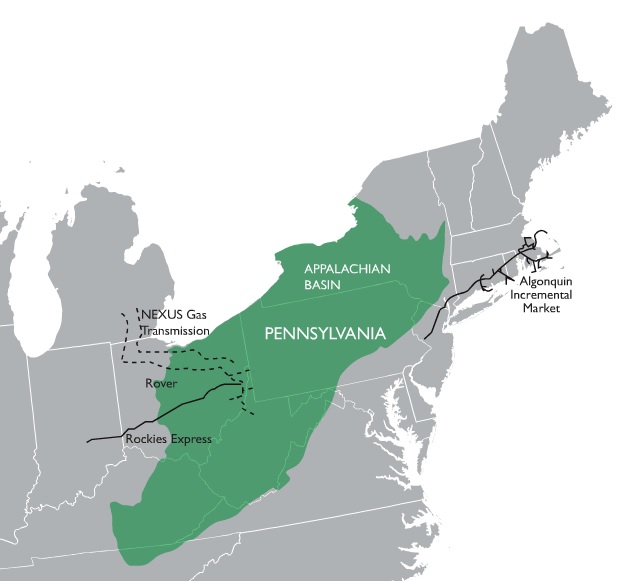 A new report from the US Energy Information Administration (EIA) shows just how important Pennsylvania, USA, is to the US energy landscape and how infrastructure improvements throughout the area have helped boost production. According to EIA data, Pennsylvania’s marketed natural gas production averaged a record 15 Bcfd (424 x 106 m3/d) in 2017, a 3% increase compared to 2016 levels. This production is largely from the Appalachian Basin.

Pennsylvania accounted for 19% of total US marketed natural gas production in 2017 and produced more natural gas than any other state except Texas.

Pennsylvania has experienced an increase in permitting and drilling activity with the expansion of regional pipeline capacity capable of moving natural gas to market centers outside of production areas. The EIA reports that the state issued 1352 natural gas drilling permits in 2016 and another 2038 in 2017. The drilling rig count in the state has also increased, averaging 20 rigs in 2016 and 33 in 2017, based on data from Baker Hughes.

In the past, natural gas production in Pennsylvania outpaced the ability of regional infrastructure to process and transport it out of the region. Several pipeline projects in recent years have alleviated these constraints, most recently the Rockies Express Zone 3 expansion and the Algonquin Incremental Market pipeline.

The Rockies Express Pipeline is one of the country’s largest pipelines and is transforming into the nation’s northernmost bi-directional natural gas header system. With 42-in. (1066-mm) and 36-in. (914-mm) diameter lines, the Rockies Express taps major supply basins in the Rocky Mountain and Appalachian regions and serves energy markets across a vast segment of North America. The completion of the Zone 3 expansion project that went in service in January 2017 marked the culmination of a series of projects to convert Zone 3 to bi-directional flow and enabled the pipeline to flow up to 4.4 Bcfd (124 x 106 m3/d) in Zone 3. West-to-east long-haul capacity is 1.8 Bcfd (50 x 106 m3/d).

The EIA forecasts natural gas production to continue to increase in the Appalachian Basin, which would indicate a need for additional pipeline capacity. Current pipeline projects include the Rover Pipeline, a 713-mi. (1147-km) pipeline designed to transport 3.25 Bcfd (92 x 106 m3/d) of domestically produced natural gas from the Marcellus and Utica Shale production areas to markets across the US and into Ontario, Canada; and the Nexus Gas Transmission Project, 255-mi. (415-km) interstate natural gas transmission pipeline that will handle 1.5 Bcfd (42 x 106 m3/d).

Both project are slated to begin operations later this year.