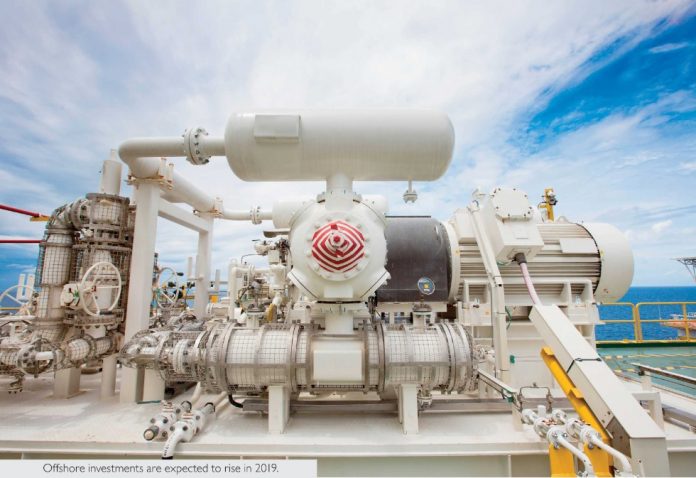 2019 will mark the first year since the oil downturn of 2014 that offshore investment levels are set to rise. This is also the first time where shale investments will not overtake investments in offshore. 2018 saw 100+ offshore projects sanctioned, compared to 60 projects in 2017 and less than 40 in 2016.

Over the next few years the industry is committed to spending over US$100 billion on offshore projects. A combination of cheap assets in mature plays, as well as saturation in shale plays, makes offshore more attractive than ever before. Enhanced oil recovery (EOR) technology increasingly benefits offshore plays. Companies invested in offshore can focus on improving existing investments instead of chasing the next big thing.

The North Sea, for example, is a mature oil and gas province carved up into drilling zones allocated between the United Kingdom, Norway, Denmark, Germany, and the Netherlands, with most of the production coming out of the UK and Norway zones. Operations in the North Sea have endured a slow decline as production decreased and the reserves slowly depleted. Eventually, most of the wells were plugged as attempts to continue operating in the North Sea seemed less and less profitable.

A combination of better technology, an exodus of large oil companies in favor of onshore shale investments, and improvements in geological data gathering have led to a resurgence of North Sea interest. As Q4 2018, the North Sea is attracting billions investment dollars. As a region home to one of the most mature offshore plays, the North Sea is a true testament to technology fueling long-term hydrocarbon extraction.

Part of this push forward is a result of …

Click here to read the entire article in the April issue!

This article appears in the April 2019 issue of Gas Compression Magazine. You can read the entire article right now by clicking the link above.

Want your own copy of Gas Compression Magazine delivered directly to you each and every month? Subscribe for FREE and choose print or digital delivery (or both!).